If you took a look at one of the previous posts on how to remember the Laplacian in different forms by using a metric,  you will notice that the form of  the Laplacian that we get is:

But in Jackson’s Classical Electrodynamics, III edition he notes the following:

This is an interesting form of the Laplacian that perhaps not everyone has encountered. This can obtained from the known form by making the substitution

and simplifying. The steps to which have been outlined below: 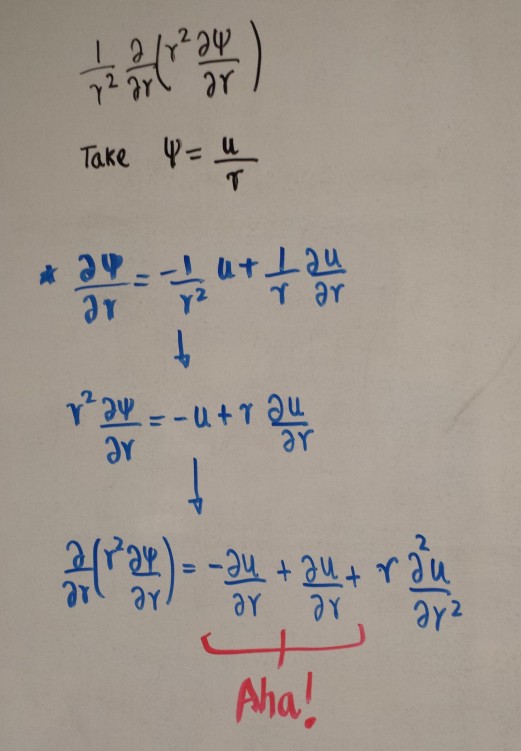 On FYP! we explored Quantum Tunneling and its hydrodynamic analogous sometime ago.

But there is an optical version of tunneling involving total internal reflection and evanescent waves that might help paint a better picture of this phenomenon.

When light encounters a different medium than the one it is already in, it bends! This phenomenon in physics is known as Refraction.

Total internal reflection
is a phenomenon which occurs when a propagating wave strikes a medium
boundary at an angle larger than a particular critical angle with
respect to the normal to the surface.

Similarly Total Internal Reflection in a prism looks like so:

Now here’s where things get interesting:

If you take a second prism and place it next to the first prism so that both glass surfaces nearly touch each other, something incredible happens.

You get a fraction of the light going through the other prism!

If that wasn’t clear, here is the same demonstration done with Microwaves and using wax as a prism:

The reason why this happens is because the incident wave does not abruptly stop when it hits the end of the prism.

Some of the waves seep out with the intensity of the wave decaying exponentially outside the first prism.

But this changes when you place another prism closer to the first one.

Does this even matter?

You might be tempted to think that this would make no difference on the macro-scale.

One possible application involving TIR and Tunneling are Optical Fibers. Loss of photons (or information) through the cladding layer of an optical fiber due to tunneling is a major concern. Therefore when they are designed the cladding layer thickness is such that the probability of tunneling to occur in such a system is extremely low.

And that’s how Tunneling, Electrodynamics and Optics are interwoven in nature.

**In case you wanted to learn more about this in rigorous manner,most standard graduate level electrodynamics such as Jackson dwell into the mathematics of Evanescent waves. Do take a look at them!

This marvelous display of physics unfolded when tiny charged droplets of water were fired through a syringe towards a needle which was also statically charged. This experiment was conducted at the ISS in 2012.

The droplets remarkably began to orbit the needle, just like some satellites do around a cylindrical planet!

It’s the ISS and things float so, nothing exquisite about that but this demonstration is to illustrate the attraction of charged objects in space..

What is this sorcery?

Since the water droplets and the needle are charged, the droplets are attracted to the needle. But hey, those drops also have some velocity, so they end up orbiting the needle instead of sticking right to it.

How cool is that?